On a very cold January evening, a woman posts on Facebook that she saw a dog and three puppies crossing 5th street in Parkersburg near the old marble factory.  Concerned volunteers Kim VanMeter and Dan and Melissa Miller would soon converge on that area to search for them.  And somehow miraculously they hear the mother dog frantically barking.  As if Lassie signaling that Timmy is stuck in a well, her barking leads them to a pipe where the puppies are hiding!  Yet despite mommy’s urgent barking and the pleas of the rescue crew, the puppies will not come out of the pipe. 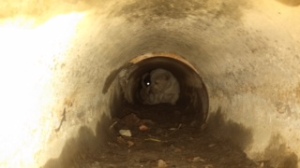 At the advice of our foster coordinator (on call at all hours of the night and day) Debbie Hines recommends that they leave the area in the hope that the puppies will come out of the pipe once they are gone.  When our Humane Officers return to the site to check on them later they are excited to find the puppies now outside the pipe but their arrival scares them right back into their “hidey hole” and out of reach.

Quick thinking and a little noise at the other end of the pipe and the puppies come scrambling out into the waiting arms of the Officers!  Whew, what a relief as the weather is quite cold and more snow is in the forecast.  Puppies are delivered to the shelter and into their awaiting foster home with Dan and Melissa while the Officers return with a large humane trap to try to catch the elusive mother dog.  Maybe the lure and aroma of yummy food will overwhelm the mother dog’s suspicious nature.

The same wisdom and savvy that probably kept her and her puppies alive, also made this great mom difficult to catch. With our Officers and other volunteers checking the trap regularly, it would take another day before mom would finally grow hungry enough to give into the trap’s charms.  Later that night Momma would be spotted inside the trap asleep, snow piling on her back.  However, she awoke when they approached and was not so pleased to see them.  She was “growly” and understandably so.  So it was decided to let her spend the night at the shelter to allow her to calm down before a reunion with her puppies would be arranged.

Apparently a good night’s rest in the warmth of the shelter, a heaping bowl of yummy food and friendly people greeting her was all it would take as the next morning she was a different dog.  The dog I met that day couldn’t have been more delightful.  Beneath the

dirty fur and the grey muzzle was an obviously very special girl.  It’s hard to explain but a sense of  wisdom, appreciation, trust and pure love all emanated from her.  Considering that she had been on the loose for some time (we’d heard she’d been spotted several times over the past months), had born and kept alive three puppies who also were in remarkable good shape (dirty but good), she was in surprisingly fine condition.  With one exception.  Her feet were weird.  Or more precisely her nails on her front feet went in all different directions.  Very strange.

Regardless, Momma was so sweet she could melt your heart. She’d rest her head on your leg or against you and just wait patiently for any return gesture of affection.   She was a charmer.

The next day, her puppy’s foster parents would take her home for that reunion with her puppies which in fact was sort of anticlimactic.  Momma was much more excited to be in a real home than seeing her puppies again.  She must have been relieved to have someone else feeding and looking after them.  She’d only spend one night in the big kennel set up for her and the puppies before she’d be given the run of the house to live  among their family and pets as if she’d always been there. 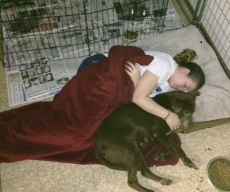 Her foster mom, Melissa clearly saw Momma’s specialness and fell in love with her immediately.  Sharing her delight through Facebook pictures of a constant companion, curling up with her and Momma’s head resting on her lap at every opportunity.  So much so that on her first night home, Melissa chose the floor beside Momma rather than her own bed.  That’s a great foster mom!

As their bond grew quickly each day, Melissa would continue to share heart-warming pictures of Momma enjoying the life of luxury.  One which she so greatly deserved after what must have been some rough times on her own.  But I will admit I was already beginning to worry about how difficult it might be to find her a home considering her age.

My worry would be pointless.  Just a few nights later after Melissa had updated our Facebook page with new photos of Momma, she received a message from a woman saying that the dog looked like her granddaughter’s dog.  The dog she thought might be Momma had been missing for a year though.  What were the odds this could be the same dog?  It didn’t seem likely and I was silently skeptical.

As the woman continued to chat online with Melissa it would take only one thing to seal the deal.  She said “her feet are messed up!”  Oh and if you say “squirrel” her granddaughter’s dog would get very excited.  If the reference to her mangled feet wasn’t sufficient, the utterance of squirrel and Momma’s excited reaction was like a DNA match!  It had to be their dog!!!!

While Momma would stay with her foster family until the puppies were old enough to find loving homes of their own, her old family was anxious for her return.  What an amazing story and lesson of hope that this dog who had obviously been on her own for some time would be reunited a year later with her family who had not given up the hope of finding her.  It’s Disney movie with a happily ever after ending.

And yet still a little bittersweet.  As a foster mom Melissa knows well the task of letting your babies go, no matter how old and how grey their muzzles may be.  So there were lots of tears shed on the drive to return Momma to her old life as Lulu, even with the knowledge of the heartwarming reunion.

But as Melissa said in her own words as she said good-bye to her… “I’m so glad to be a part of her reunion and her way home but a part of me will always be with her.  I know they were happy to get Lulu back,  But to me, she’ll always be Momma.”

Two great mothers doing what they are meant to do…taking care of their babies and then letting them go to be loved by others.