Okay I won’t hold out for those anxious for news of Atticus in his new forever home.  While it’s only been a few days, I can tell you that he’s doing well, is getting so much attention as the only dog and is adored by his new mother.  Funny that he never slept in bed with me but has from the very first night in his new home.  He greeted her with kisses too, which were infrequent with me as well.  Would it be crazy to think that he was saving these things for her?  I’m not jealous but actually reassured by how easily he has gone from his life here to his new one.  And I couldn’t be happier for him!

I know the other big question is what happened to his previous owner.  Nothing yet BUT on the very day Atticus went home with his new Mom, in fact just 30 minutes after he had been loaded into her car with his belongings — the basket of goodies AND his new bed AND his new leash AND his bag of special food (which is harder to buy in this town than Sudafed) AND his bag of pills and supplements – (she should have rented a U-Haul); we received notice of the court date (June 6th, 2:30 – Magistrate Court) of his former “owner”.   Coincidence or fate?

Maybe even more interesting was that that I received the text message about the court date, I was on the phone with the local media who wanted to do a story on Atti’s adoption.  I was trying to explain to her and trying not to cry too much while I did, that he had just left for his new home and that a story in a few weeks might be best.  I wanted to give his new Mom and Atti a chance to get to know each other AND to ensure that this was going to be the best for both.  I also thought it would be great for his followers to see him in his new home and hear from his new mom how things were going there.  Pervasive though was the thought that I didn’t want his new mom to feel any pressure if it wasn’t working.  I didn’t want her to feel like she was letting everyone down if she felt it was best for him to come back to me after a few weeks.  Which he most assuredly would.

But the news person told me that in a couple of weeks it wouldn’t be a story.

Honestly that comment irked me.  First I think she’s wrong. Secondly, I think it would be a great story in a few weeks when Atti is all settled in and loving his new life.  And lastly, in a few weeks his previous owner will go to court and what a contrast the story of Atticus in his new forever home will be to that!

While his 15 minutes of fame may have diluted some after 9 weeks, 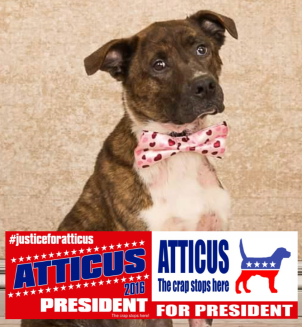 Atti and his campaign poster – bumper stickers I had made for a fundraiser!  How fun!

it was hard to see it by the number of messages I’d receive when I didn’t post updates about him in a timely manner.  Honestly I was a bit surprised by the almost obsessive interest in Atticus, weeks after his rescue when every post would be met with hundreds of views, likes and/or comments.

Truthfully if I had to do it all over again I may not have been so quick to tell his story or might have delayed it some until his health was assured.  There were moments that we were so worried about whether or not he was going to even make it AND on top of that angst, the thought that I’d have to share bad news with those that had never met him but had come to love him, was a bit daunting.

But sharing his story was important!  Beyond wanting the public to know his story, it was imperative that I shared the story of the little girl, Morgan whose compassion and courage in speaking up for him surely saved his life. It was just too wonderful of a story and lesson to not share.  Practically speaking, we needed help paying his bills too.  Longer term it was important that we rallied a public outcry against such treatment!  Not only to help ensure punishment of the perpetrator but also to help us change laws that will better protect such animals in the future!  Only public pressure will make that happen!

Atti meets Morgan for the 2nd time.  She and her Dad are now volunteers at our shelter!

Even with those moments of doubt about how I might share bad news, the scales were tilted the other direction more often than not through the “tons” of caring we received for him.  Whether words of support, prayers, gifts of toys or hand-made blankets, donations towards his vet bills, or just all the positive thoughts – all buoyed our spirits.  Mine anyway.   Who knows what he felt or experienced from all the positive energy coming his way through the universe but it’s impossible to imagine that he didn’t feel it in some way just as much as I did.  And impossible that it didn’t help in his healing.

Whatever it is about his story that grabbed the hearts of so many, I’m happy for it.  Not for his sake as much as for those in the future that may be helped as a result.  I believe that those who in the past may not have gotten involved will be inspired to do so because of the little girl who spoke up for Atticus.  I believe they will be made more courageous by Morgan’s fearlessness.  I believe parents will listen to the plees of their children and respond more quickly because of Morgan and her own father’s guilt for not doing so sooner.  I believe others will act because of the brave actions of the woman who Morgan finally found to help her, who didn’t stop with feeding Atticus but called the authorities.

I believe others too will simply see hope for the hopeless when they see a dog chained continuously.  They will be enraged and speak up and act.  Because of Atti there will be more voices against such common practice, louder ones demanding stronger law to protect and harsher punishment for the criminals.

So when the reporter suggested that Atticus’ story won’t be a story a few weeks from now, I guess I’ll just have to beg to differ.  I suspect Atticus’ story will have a longer shelf life than most because there are too many unwilling to forget it.   Certainly if I have anything to do with it, I will use Atticus and the others who have suffered the same injustice as a catalyst for change.  And suspect there will be many others who will change our community and hopefully the world because we are unwilling to forget.

So that would have been the end of this blog if it were not for fate once again intervening in my life as SO often is the case.  For as I wrote those final hopefully prophetic words, my phone pinged a message from none other than Atticus’ mom.  Coincidence? I think not.

Her words are as much a gift to you, Atticus’ followers, as they are for me.  Enjoy.

“I’M SITTING HERE WATCHING ATTIE NAP & REALIZE I HAVE TURNED INTO A PILE OF MUSH.  HE IS SO SWEET I JUST HAVE TO RESTRAIN MYSELF FROM SMOTHERING HIM WITH LOVE.”