You may recall an earlier column about a new volunteer, Anna Earl and her inspiring first experience with helping save an animal life.  Well, Anna continues to inspire me and others so much I just had to share more of her exploits!

It didn’t take long for Anna and her mom, Michelle to become regular fixtures in our shelter!  They walk dogs and cuddle cats routinely but I was a bit surprised by Anna’s next little project.

Someone dumped off a dog one night that was incredibly scared, who we named Baby Girl.  She cowered for days in the back her kennel, barely raising her head off the ground to make eye contact with passersby.  Certainly, not the dog I’d expect an 8 year old to choose for the focus of her time and energy.  And while some would have been afraid of Baby Girl’s less than welcoming demeanor, Anna was undaunted by it.

in Baby Girl’s kennel with Anna’s arms encircling Baby’s neck.  As if that alone wasn’t cute enough, Anna was wearing a volunteer shirt with our motto “Walk, Cuddle, Love” clearly visible on her back, as if the shirt had been designed for Anna alone.

My next visit to the shelter I found Anna curled up next to Baby reading her a book.  Totally engrossed in her task, while

dogs barked chaotically around her.  I’ve heard of programs that recommend children read aloud to a pet as a confidence builder, but in Anna’s case this was all about building Baby’s trust.

As it became a daily routine, there were encouraging baby steps forward.  One day it was Baby standing in her kennel.  Next was a welcoming wagging tail.  Then it was Baby Girl at the front of kennel obviously waiting for Anna.  I don’t know which was more fun, Anna’s glee at Baby’s Girl’s improvements or the Staff enjoying every moment of it along with her.  Whatever the case, I thought repeatedly that there was more happening here than a volunteer helping a dog.

It wouldn’t be long before Michelle would take Baby Girl home to foster, hoping to accelerate her progress and road to adoptability.   And in fact, it did.  While there were a few bumps along the way, regular reports back on her progress demonstrated again that Anna and Michelle were doing great things to bring Baby Girl out of her shell and happy videos of her playing and romping in the yard, were proof of it.

So when our Staff put together a lovely book about Baby Girl and Anna’s adventures together as a surprise for Anna, I was delighted.  Not simply because of the story itself but moreover because its further proof of how moved everyone was by this little girl and her huge heart.

A little party was planned by the Staff to give her the book and they would ask her to read it to Baby Girl.  The plan included a willing conspiring mother who would need to tell Anna that they were bringing Baby Girl back to the shelter to meet a prospective adopter.

While as a foster you hope for this day, it’s almost always bittersweet.  Having cried my way to the shelter on numerous such occasions, not surprisingly, Anna was upset at the prospect of saying good bye to her new best friend.  Apparently, there were lots of tears on the trip.

But welcomed by a mob of Staff and volunteers gathered in the lobby to greet them, Anna was quite surprised.  When she was given her book and asked to read it to Baby she didn’t waiver.  She beamed in retelling of her own tale while the rest of her fans stood nearby and cried like babies.

And when she turned to the last page and read the ending where Anna and Baby Girl live happily ever after as Baby Girl’s adopter was none other than Anna herself, she struggled reading the words.  I think unsure of whether or not they were really true.   Our cheers assured her they were!

Baby Girl has a new home and a new name, Bridget which means strength in Irish.  My favorite of the choices offered, by the way.  And while they have a new addition to their family, they still spend lots of time at the shelter including fostering another puppy and letting him go without too many tears.  A litter of kittens replaced him. 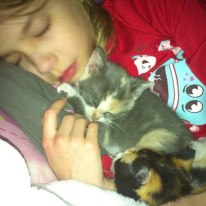 Anna and Michelle are just two of the many the volunteers that share their time, energy and love with our animals.  And in moments like these I realize what gifts they are to the animals and to those of us, staff and volunteers alike, who have been disheartened a little by the years of abuse, neglect and carelessness we have been witness to.

Standing there in that lobby and looking across at my shelter family and seeing the tears in the eyes of all of us, I was reminded of how lucky we all are to know what we are meant to do in life and to get to share it with each other.   And our new fearless leader… Anna!