You Are Ours Now – By Guest Blogger Michelle Earl

Guest Blogger, Michelle Earl shares this story from her heart about abuse and neglect and ultimately rescue.  I know when she wrote it initially it was as an attempt to relieve herself of some of the anger and frustration of the entire situation that revolved around this lovely animal who deserved so much more than she has experienced in the past two years of her life. But it needs to be shared.  It needs to be read.  And it needs to be an inspiration to others to take action when you see wrong!  And it should be a lesson in forgiveness as Audra will forgive us all of the sins of her past but we probably lack the qualities that so often our animals display but we struggle to share.  We can only strive to be as forgiving and open of heart as these amazing animals.

Her name was Bells.  I suppose when she was a little puppy her owners found it cute. I can imagine her as a playful puppy, sweet and full of joy.  I can imagine her owners would coddle her and love on her as she romped around with their children. At least that is what I imagine.

So how did it happen that Bells came to be chained up on a heavy chain, with a leather collar that was too tight, with nearly no human touch? How did Bells end up living outside for 2 years with food thrown to her once a week, likely given her size, that the entire bag may have been dumped out for her to eat until the next week when someone decided she needed fed again.

I was nearing ready for bed when I saw the post on our HSOP page.  I nearly did not check it, as at times Facebook is so exhausting. It is a 24/7 job-answering questions, posting pictures, sharing questions, deleting absurd posts, etc. But I did check it. And so glad I did. For when I read the post, there was a picture of Bells staring at me. Her eyes seemed to be begging for help. 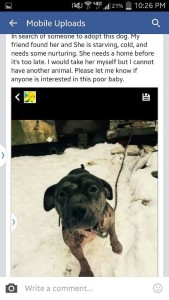 I could see the snow all around as  the picture showed her chained outside. My eyes filled up with tears as I could also see the hair missing in most areas of her chest and body.  The girl who contacted us was asking for help for Bells.  I told her I would meet her that night as I could not stand the thought of Bells being outside one more second.  But unfortunately she did not have all of the information I needed to help Bells.  So I went to bed, for another restless night thinking of her.

The next morning, I was contacted by the girl who asked me if I could meet the friend who had the dog later that day – to simplify planning I asked for the  contact number so I could make arrangements.  So I called the woman, who gave a long story about how Bells came to be living on that chain, none of which included her as having any responsibility for what we would later find.  She was afraid of pit bulls, and Bells is one of them, even though Bells was described as having great temperament.  I gave her my cell phone number and told her if she could not bring her in, I could meet her anytime.

After I hung up the phone I began panicking. What if she  decided it was too much hassle? What if her son did not let her take the dog?  What if it was too late to save this dog? So I followed my heart and talked to our shelter manager Kelly who agreed we needed to go get her.

When we arrived to the house, and we followed her over the hill through the mud and ice, there she was……Bells. I did not hesitate to go put a leash on her though I was sure her neck was sore. Bells feet were enlarged from swelling, most of her beautiful fur gone from the chest area and multiple patches of fur missing from her body.

As I shuddered to think of her freezing outside we just wanted to get her in the car and go. Kelly, our manager, polite and getting the job done, asked her several questions about Bells.  She was “great” with kids, “a friendly dog” and was only described as growling when her son was spanking his child (would just assume it was more than a spank).  She did show a hint of concern that she may be “put to sleep.” Seemed like an odd question since any one of these past few days she may have in the frigid temperatures and nobody seemed to mind she may have died a slow hypothermic death. She signed her over regardless of our answer, which was we needed to have her medically evaluated.

So here I was wondering again……how in world could Bells, this sweet and gentle dog, have been so severely neglected for 2 years. TWO YEARS!!!!! This dog has been living on a chain over a hill with little interaction from people. Yet she jumped into my car, gave us both kisses, ate the entire container of food she was given and then settled down in the warm sunshine coming through my windows. She curled up on the blankets like she had been riding in my car every day.

Off to the vet Bells went, giving Kelly and I kisses the whole way there-blood seeping from her feet from the multiple wounds on her body and seemingly just as lovable as could be. After being checked on by the vet, we learned Bells has Lymes disease, probably ringworm and horrible skin with a severe case of Mange. She cannot even be vaccinated at this time because her medical issues are more pressing than vaccinating her at this time.

And one more time I ask – how did Bells go from the loved puppy that I am sure she once was – to now just a menace to this lady’s property. Too much of a nuisance even to go feed her, love her, allow her in the house that she just wanted her “gone”. I guess I will never know, nor do I really care, as they do not deserve her. And I believe strongly in karma.

So as I cry for Audra, and for all of the harmed animals, I know in my heart, that these animals receive more love in our shelter than they have ever received in their previous lives.  People say “I could never bring them to the shelter.” But it is ok for them to be outside in the cold, alone, untouched, unloved. Not in my house. Not in my shelter. Not in my world. They will never be alone.  We will love you Audra….as you are OURS now.