I love the following —

I looked at all the caged animals in the shelter…the cast-offs of human society.

I saw in their eyes love and hope, fear and dread, sadness, and betrayal. And I was angry.

God was silent for a moment, and then He spoke softly, “I have done something,” he replied. “I created you.”

As I sat down at my computer one evening recently and perused our very active Humane Society Facebook group, I noticed a post about puppies that had been found and a plea for someone to do something. Scanning the comments that were quickly building in reaction, including one that accused our shelter staff of “obviously not caring or they would be doing something”, there was one that still is lingering in my mind. It said “It’s been 29 minutes. Why isn’t someone doing something?”

Honestly, I had to stop myself from what surely would have been a very negative “what have you been doing in the last 29 minutes that kept you from being that someone?” Largely because I was tired and stressed as my previous 29 minutes had been spent trying to keep two puppies alive. As a full time foster mom for our shelter I had nine puppies and eight new born kittens and despite my best efforts, I had two sick puppies and three kittens at the same time. I was whipped.

But truthfully even without any fosters, my daily routine involves caring for 20 animals of my own plus my full time job, and with volunteering and Board responsibilities my days are pretty hectic. But I’m never without fosters…67 already this year. Using my time wisely and my energy productively is pretty essential to maintaining my sanity. Hence why it may be conceivable that I took the 29 minute statement too personally and too literally. But it exemplifies a problem I see where some have the expectation that others should do something. That it is someone else’s responsibility to help.

It is sadly this sort of attitude that dulls my reaction to those that want to complain about what they think others should be doing rather than what they could be doing. In particular, diatribes about what our shelter or staff should or should not be doing. Yes, I do realize that often those complaining just don’t really have an understanding of the reality we deal with every day. Helping animals is not a hobby for me or for most of the people in the circles in which I run. It’s a constant and a priority. And while some of those people are paid to help animals in need, MANY of them are just ordinary animal lovers choosing to get involved. Just like I am.

People often ask me what keeps me from exploding on Facebook in response to such rants. It’s simply that while I will try to educate people when it seems worthy of my waning energy, I will not waste my time arguing.  I have real work to do.

My time and energy are surely worthy of those that truly want to help. Those who want to be a part of the solution rather than complaining about it.   If I might wax a bit biblical for a moment…those that want to learn to fish, rather than being given one have my full support.

It’s why when Christina Lerch, a woman I met years ago at an adoption event, messaged me late one night (okay, it was 10 p.m. but since my day begins at 4 a.m., 10 p.m. is LATE) about some tiny kittens abandoned by their mother, it got my attention. While the mother cat would come back for two of three kittens, she left one behind that appeared to have a cleft palette and was obviously too young to survive on its own. Christina wanted to help but also shared that she had two dogs of her own, two cats and an 18 month old baby and couldn’t keep this kitten. BUT offered to help financially with its care if that would help.

I felt badly telling her that in the case of a newborn kitten, money is not much help. They need a mommy. I also felt a bit bad when I shamed her a little with a recount of my own inventory and responsibilities. I was struggling with the newborn kittens I had already and our shelter has very few fosters willing to do bottle babies. Shockingly, there are few who want to get up every two to three hours to feed baby kittens and puppies. And that’s before you have to help them pee and poop.

While I hated to sound hopeless or heartless, I didn’t have much hope for this kitten especially if it had a cleft palette.

So I was incredibly grateful, if not a bit surprised, when her response asked what it would take for her to keep this baby alive. Whew! Here was someone willing to step up! Now we’re talking!

We’d soon meet so I could check over the kitten (no cleft palette but more of a lip deformity), provide her with some tools of the bottle baby trade, demonstrate my approach to making a baby kitten pee and poop, and cheer her on. Warning her too that she could do everything perfectly and that Mother Nature was a mighty lady and to not feel she had failed if the baby did not survive.

Christina was not deterred then nor the next day when she needed some instructions on how to give an enema to the tiny kitten, now named Elle that despite Christina’s best attempts had not had a bowel movement in 48 hours. One soap suds enema later and wallah, we have kitty poo to celebrate! 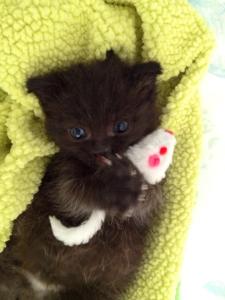 Over the course of the next few weeks, Christina mothered her new baby, learning as she went along more from on the job training than anything I could ever share. There would be a few worried mother messages now and then, mostly when Elle once again had a bout of constipation, but the celebratory “she pooped!” message would also come. With it all, Christina was experiencing the stresses and joys…the sensation of relief and exultation at the smallest of things that are inherent in fostering!

I’m so very proud of Christina. Initially because she took up the task rather than looking to someone else to do something. Wanting to learn to fish rather than wanting just a fish. In part because she did great with what is often an emotional rollercoaster. I, in fact lost three of my eight foster kittens during that same period and it’s tough stuff no matter how experienced you are. But with luck and the continued care of her foster mom, I think Elle is going to make it.

And if that is not enough, if Christina can find a special person who will give Elle the perfect home, as her deformed lip may require some special care long term, I think Christina may be able to let her go. And I SO need her to find that perfect home as Christina wants to become a foster for our shelter! Having someone with her experience with bottle babies is priceless to saving more lives like Elle. 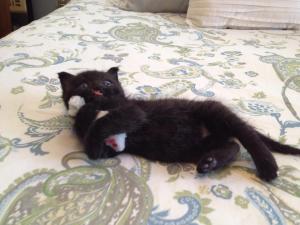 Christina, I applaud you and will happily help teach you to fish any time you need me. I find few things more worthy of one’s heart and time than such lifesaving efforts. You and I both know that while we are just ordinary animal lovers, choosing to get involved is not only changing the lives of the animals that come our way but changing our lives too!

And we are all the better for it!  Especially little Elle!