When I walked into our lobby one afternoon not long ago and was greeted by the red rimmed eyes of one of our staff, I immediately got that hollow feeling in my stomach. The feeling that happens when I realize it’s been one of those days.   Like when I learn that we’ve had 30 animals arrive before noon when we have only a handful of empty cages. Or when we discover that one of the cats has tested positive for FIV. Or one of those days when after waiting weeks if not months for that perfect home for one of our cats or dogs and seeing them finally go home, and then low and behold, learning it wasn’t so perfect after all and the animal is back.

Okay maybe it’s just a little PMS (yes, it is possible!) and nothing really bad has happened at all and someone is just have a bit of an emotional day. All are conceivable.

But on this day it was none of the above as before I could even ask “hey, what’s going on?” someone blurted out “She’s going to take Moxy!”

As my memory is lousy, the name Moxy didn’t send off high alerts immediately, so I’m sure I furrowed up my brow a bit and gave a quizzical “Who is taking who.” And then it hit me, Moxy!! A black German Shepherd, one of several German Shepherds we’d recently experienced a run on, and as sweet as she could be. While certainly up in years for a large dog, she was quick to run to the front of her kennel for anyone holding a leash and wouldn’t be left behind on our walks around the block.

her up for adoption and unfortunately those bumps turned out to be cancerous. The prognosis wasn’t good. A large, black, older dog with cancer. Geez, that’s just about the worst combination of traits one could ask for.  Honestly, odds were that Moxy would be the last dog chosen.

But she certainly seemed comfortable – the Vet said she was pain-free, at least for the time being. And luckily at that moment we were not short on space. She seemed content and comfortable in the shelter.   So we’d keep her that way for as long as we could. If and when it came time to make a decision, we would do so, but for now, she’d be a part of our family and loved accordingly. The hopes for an adopter, well those would not be high, but you just never know who might walk through our door and make a miracle happen.

And that’s exactly what Janie Duckworth did for Moxy. Walked in our door to adopt a cat and did so AND adopted a big beautiful cancer filled dog to boot. I didn’t know Janie but as she returned to the lobby, I gave her one of those silly ass grins with my eyes now red rimmed and full of tears too and said to her “I don’t know you, but I love you!”

I can’t say enough about people like Janie who make such choices. They don’t walk in our shelter every day but when they do, honestly it’s like you want to just wrap your arms around them and tell them how special they are and do so without freaking them out. She reminded me of the young lady who also chose to make her first dog a senior yellow Lab who also was up there in years. And when she brought her recently to our doggy swim at Jackson pool, I was not only amazed at how spry she appears but obviously how incredibly in love with her, her new mom was only after a few months. She may have been a new addition but their bond with as deep as a dog raised from a puppy to her senior years.

Soon enough the gift of pictures of our beloved Moxy would arrive.

Lounging on the deck – actually seemingly on alert on the deck gazing off into the yard, carrying a soccer ball around the grassy lawn, and sprawled out at her food bowl chowing down….you’d never know that she has terminal cancer throughout her body. Incurable maybe but I have to believe Moxy doesn’t know anything about incurable diseases or that she may not live forever. As in this moment she couldn’t be happier to follow her new mom everywhere and just share in that limitless love. 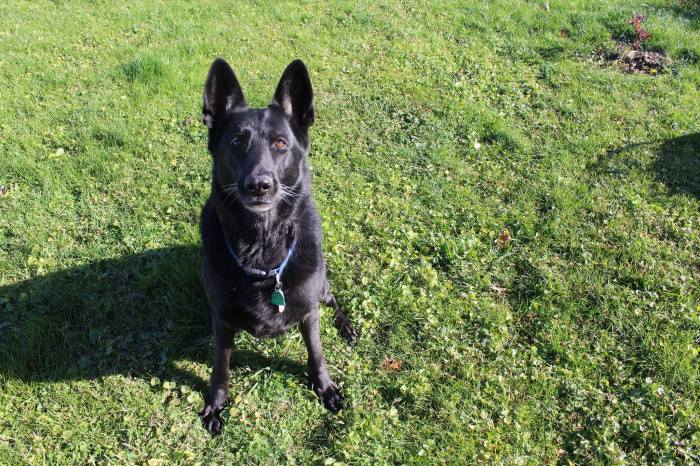 Limitless as Janie didn’t let Moxy’s age discourage her choice. Or her illness. Or the thought that her heart might be broken sooner rather than later. It takes an open mind and a strong heart to open yourself up to certain pain, and yet I suspect most people will think that it is Moxy who received the great gift of this incredible home despite her seemingly bleak future. But I know the truth just as Janie does.

Adopting an older animal is not about how soon your heart will be broken. It’s about how much your heart is filled because of them.