Home › Shelter Facts › It’s all in the view

It’s all in the view

Rarely does a day go by that someone doesn’t say that they don’t understand how I can do what I do. More often than not they have seen some sad story about another dog or cat abandoned, abused or neglected that has arrived at our shelter when they make such exasperated comments.

Most recently it was a coworker who saw a post on Facebook about a 13 year old dog that after 10 years had been surrendered when she no longer proved useful as a puppy machine. And as they often are, this person was a bit taken aback by my response of “I’m so happy we have her!” Of course I continued with “at least now we would have a chance to help her find a home to live out the rest of her life where she will be truly loved, rather than only valued as a money making puppy producing machine.” I’ve said this so many times, it might sound a bit rehearsed from overuse.

And while I understand why people feel sad and angry — why they say things like “I’d be afraid I might come across the counter and strangle someone,” I really attempt to explain that I can’t afford to linger in a past that I cannot change. I just choose to take a different view and focus on what I can do something about. Just like with the 13 year old dog. I can change her future. I cannot change the crappy life she had before.

I’d like to believe that I’m pretty convincing in my arguments for this kind of half-full thinking but I suspect most walk away from me with reluctant skepticism that’s born mostly from their own direct experience and the belief that they just couldn’t make themselves feel the way I do. I’m sure they think that I must be some sort of Masochist to put myself in position to be exposed to such crap over and over again.  In fact I’d prefer to avoid the difficult, sad and challenging stuff but sometimes you just have to deal with those sorts of things to get to the good stuff.

Sort of like what people must feel like when mountain climbers try and explain why they go through all the work and risk to climb a mountain just to see the view from the top.

But truthfully it is how I can do what I do and have done so for years. I see the bad stuff, the sad stuff, the neglect and the abuse. I have felt the desperation as our shelter fills and the dread as the next animal approaches the door. Knowing that whoever came through the front door would mean someone else had to be taken through the back door to make room for them. But I can’t just see the worst of it without trying to see the best. Those that without us would be lost. Those that without a place like our shelter to go to might still be living in despair.  Hopeless. As my new favorite slogan “Hope away from home” says, we can offer them just that…hope! And not only do I have hope, I know that if we can see beyond the ignorance and irresponsibility, we can help a lot of animals.

Just like Tank, who was adopted from our shelter as a big puppy into a home that loved him but couldn’t contain him. Time and time again he arrived back at our shelter (his home was only a few blocks away) either at his own inclination – I met him trotting down along the floodwall fence last summer heading our way just as happy as could be. Or with a little help from friends – one of our staff picked him up more than once on the street a block away. Or with help from strangers – this last time at Tim Hortons where he’d obviously gone seeking companionship and maybe a doughnut or two.

His adopters had reclaimed him repeatedly (six times I think) and each time expressed frustration by his ingenuity in escaping their fence. They really seemed to care but this last time they didn’t come for him. Whether they knew where he was and chose to let him stay or just gave up, honestly I was happy they didn’t come. Because we could help him find a home where we wouldn’t worry about him any more. Too much traffic and danger for this boy to be out wandering the streets. And he’s found such a wonderful home in the country with people who will build a sturdy fence for him but also can offer him acres of land and squirrels and deer for him to chase without the worry of traffic and such. So happy for him!

Or in the case of Diesel, who honestly I worried might be a bit of a challenge to find just the right home for. Not that he wasn’t a really smart and beautiful dog. He was both! But he wasn’t the dog for just anyone. Did I mention that he was really smart? Smart dogs can be exceedingly challenging. Diesel was quite independent and a bit headstrong.   The kind of dog that would necessitate an owner who was unwilling to give up their position as the head of household to this boy with a herding mentality and a natural fearlessness to go along with it. I needn’t worry as I would meet Diesel’s adopter in the lobby the day she came for him and it was as if she’d been waiting for just such a dog. 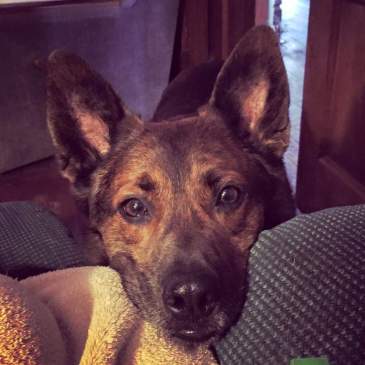 With a little diligence on her part, Diesel now Kobus couldn’t be more perfect for her! And while his mom regularly shares updates and pictures, this still is my favorite of him from the first few days after he went home with her.

I’m not sure the horse was as pleased as I, but I love it!

And then there of course is Raider, who in fact inspired this blog. Not because Raider was a challenge to find a home for. Not at all since he was not only young with an outgoing personality and affectionate nature, but he was beautiful! His curly coated, Labby like appearance would attract many. 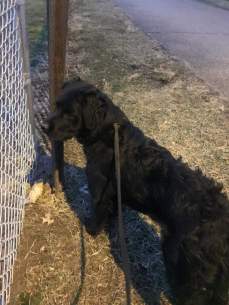 But he wasn’t in the shelter long enough to attract the drove of potential adopters I anticipated, as one of our long standing volunteers and fosters, Lois Roberts, helped Raider begin the next chapter of his life when she hooked him up with her nephew, who himself was beginning a new chapter in a new place…in Alaska!

After a short stint at Lois’ to ensure he’d be a good fit for her nephew, Raider would soon be taking the long trek north by planes, trains and automobiles. Not sure if in that order and don’t actually think there were trains involved but you get my point. All the way to meet his new best friend for the first time. The effort was great, the trip was long but I would have to believe that if Raider could talk, he would attest that it was so worth every mile!

The first picture would come not long after in February of last year and it left me weeping in joy. No longer Raider but named LB, short for Little Buddy, enjoying his new life and oh, what a life!

So the other morning when I awoke to a new picture in my newsfeed, it too would cause that lump in my throat that truly leaves me speechless. It’s not simply because it reminds me how lucky he is, nor just how neat it is that someone went to such lengths to give him that life. But also because I just feel incredibly blessed to be a part of doing something that changes lives. Not just the animals. Not just their adopters. But my own too.

It is why those of us involved do what we do!  We get to be a part of something that at times means experiencing some of the worst to experience the best of it. Why else would people climb mountains, putting themselves through exhausting ordeals and dangerous ones too? Often battling Mother Nature herself to get a glimpse of a breathtaking view before heading back down again. I have to believe if others would attempt the climb, they too could feel how gratifying it is to reach the summit and bear witness to the beauty of the view, they would completely understand. I know it is was keeps me going. And apparently I’m not alone.

Raider has a pretty awesome view too.  Don’t you think?