Home › Fostering › By No Fault of Her Own

By No Fault of Her Own

As I lay on the floor on the thick pile of blankets that are the nest for my foster dog Marnie, I found myself again wondering why she was curled up against me…spooning…as I listened to her breath coming in short strained huffs. I wasn’t really asking why she was laying there. I know the answer to that. In part because she’s a lovebug and adores cuddling. But also because Marnie is very pregnant and will soon (I hope very soon so I can stop lying on the floor wondering how soon) deliver what I suspect will be many puppies into this world.

I’ve done this animal rescue stuff long enough that I’ve grown apathetic to the reasons why so many animals are homeless and in shelters. I’ve truly ceased to be surprised or even angry that so many are unwanted. I cannot tell you how many times people have asked me why some animal is homeless and wondered aloud that there must be something wrong with them, otherwise why would they be homeless. Why wouldn’t their owner come looking? And often my response is the same…by no fault of their own.

And yet here I am again wondering why Marnie is in my home and not in her own. I can’t even remember when I stopped believing that the owners were all out there desperately searching but for some reason had not found their way to our shelter to reclaim their beloved pet. I used to imagine the stories that were all plausible and sometimes true. There are those that surely do so and have born witness to the joyful reunion full of tears and happy wags, squeals of delight, from owners and dogs alike, and the sheer relief of finding their pet safe again. Those are just the best moments. But those moments are too few and far between. Only 8% of all animals that come to our shelter are very reclaimed by their owners.

And yet I can’t seem to suppress my curiosity about what caused Marnie to waddle into our door. Beyond the fact that she’s pregnant and was obviously very much so when she arrived, she’s a perfect dog. In the horse world, we’d say she has no vices. She is a love. Gets along famously with all my dogs despite her advance state of pregnancy and as such could be expected to be somewhat testy with others. But she’s not. She’s gentle, affectionate….loves to cuddle…seems housebroken despite a bladder that is pressed with puppies that makes her need to go out often. She hasn’t chewed a thing other than briefly playing with a toy now and then. And of course there are those eyes. The soulful kind that look at you as if to say “I will love you forever for nothing other than the softest pat of my head or the scratch of my belly.” 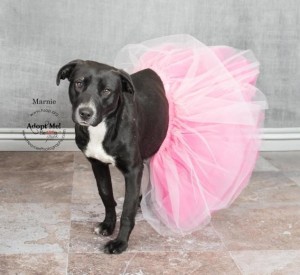 All of which causes me to wonder how someone could let her go. How someone could not know what I learned on the 10 minute drive home with her. As she climbed in my car and moved between the seats to rest her head on my forearm as I drove, I knew then that she was all heart. And yet someone either failed to see the same or allow it to be worth whatever trouble or problem her condition and the impending birth might bring. Right now their loss is my gain and someday will be someone else’s.

As such I remind myself that I am happy she is homeless. That she came to our shelter and is with me. Because I will ensure that she knows nothing but love and appreciation for all that she is in her next home. While she won’t stay with me forever and just until her yet unborn puppies are old enough to be adopted, but I will find her the best home ever. Partly as a promised blessing for her but also for the family that deserves such. And when they ask how she became homeless and what would make someone allow a dog this wonderful to be homeless, I will answer with the only truth I know.

It was by no fault of her own.