Hoping Tomorrow Brings a Miracle Instead 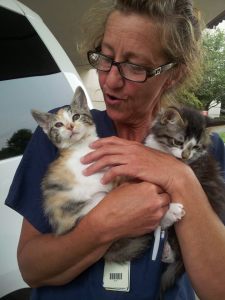 7.8.13 Update:  Less than two weeks ago I wrote this blog with little hope.  And yet today I handed these darling babies to a wonderful woman who will love and care for them for life.  While it feels a tad bit strange to be on the opposite end of rescuing…as their new mom, Vickie Lynn Chapin, a loyal volunteer in our shelter, saved these babies from uncertainty by offering to adopt them when I had given up hope that I could ever find them homes and euthanizing them would be their outcome.  She’s not doing so feeling sorry for them or out of pity or even trying to help me.  She believes that she’s meant to have and help these kittens and is so excited to do so.  While I knew instantly when Vickie opened her home and life to them, that it was an ideal situation for the kittens,  it was her admission that having these little kittens in her life would make her a better person that brought me to tears.  She was their miracle and maybe in some small way they will be her’s as well.

The fact that I’m blogging on a Tuesday and having a drink while I do it says much about where my heart and mind is tonight. I’ve been struggling for a few days with a problem and having spent part of this evening with a litter of kittens and their mom that I’ve been fostering since the 22nd of May, I decided sharing it here was called for.  Not that it will solve anything or make the decision I must make any easier but maybe a miracle will happen through my sharing of it.  It’s the only hope I have.

Having been so consumed by my two remaining bottle baby puppies over the last 10 days, I must admit I hadn’t spent much time with this little family of kittens during that time.  While on one hand the puppies are doing well and thriving beautifully after a long weekend of touch and go moments, I have a heavy heart about the kittens.  Or at least two of them…..Weaver and Smudge.

They were tiny kittens, five of them when I brought them home over a month ago with their wonderfully outgoing and friendly mother.  As their story goes, someone found the five kittens abandoned no more than 3 or 4 weeks old and brought them to the shelter.  Before I could even bring them home, the same person arrived the following day with their mother who apparently had come looking for them.  It was a happy reunion and she took right to feeding them and they were equally enthusiastic in rejoining their mother.

I was even happier as that meant I would not have to worry about how to feed these babies.

They all seemed to be doing well for the first couple of weeks until I noticed about a week ago that one of the kittens was wobbly and falling down often as she ran around the room.

I felt horrible as this could have been going on for days but my focus on the puppies and lack of sleep left me less than attentive to the kittens.  As I watched each kitten move around the room, I noticed another of the kittens that while walking and running without falling was obviously somewhat wobbly on his feet as well.

They along with the puppies would all take a trip to the vet in the hope that it was something she could help with and we’d be all back in good standing in no time.  Literally.  And while this was true of my puppies, the kittens have not been so lucky.  Over a week later, the kittens, while pain-free, playful and active as wobbly kittens can be, are showing no signs of improvement.  Dr. Carole’s tests and research point towards cerebellar hypoplasia.  I’ll leave it to those of you interested in learning more about it to Google it rather than me trying to make sense of it here but let’s just say that it doesn’t make a kitten very adoptable.  It also is hard to know at this point whether it will get worse or not.

The little calico who I  now call Weaver is far worse than the little boy, who I named Smudge for obvious reasons.  Smudge is quite mobile and while he can lose his balance from time to time, he runs and plays around the room in a manner that gives me some hope for him.  Hard to feel overly hopeful when I know there are so many perfect kittens still waiting for homes but I can hope. 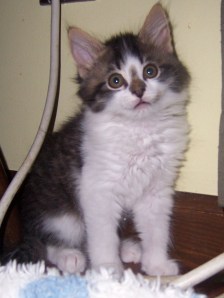 Weaver is much more affected by the condition.  As such she can rarely walk more than a step or two before falling over.  While it is not painful for her it is painful to watch.  She is playful and ornery and curious but its difficult for me to be with them and their perfectly normal siblings as I can’t help myself but think that these kittens will never find homes.  I’ve watched Youtube videos of other kittens with the same disorder and some have grown up to have fairly good balance and very good lives.  Still I just can’t help but wonder who is going to give these babies a chance?

While they both use the litter box religously it seems, my keeping them seems unreasonable and somewhat irresponsible.  With so many other animals in my home, it would not be safe for them to roam the house free.  Thus, if I kept them I’d be forced to confine them to their current room for life or at least years.  This would mean no more fostering of litters of kittens for me which would in turn mean literally hundreds of other kittens I would not be able to help. I’d save two lives but likely cost the lives of hundreds of others.

It struck me this evening that I’m experiencing exactly what our shelter staff feels when they’ve cared for animals in the shelter for days, weeks or months and then because of the circumstances of the shelter world and overpopulation they are forced to euthanize those they have helped to save.  It really is a ridiculous thing to ask people to do.  And while I can delay it until their siblings are all adopted, I’ll be forced to do it soon enough.  I’m not ready yet.

But eventually a decision will need to be made.   I’ll regret it and mourn over and be sickened by it.  But it will have to happen one day soon.  I wonder if tomorrow I’ll wake up and feel strong enough to make the decision that must be made.  But then I think maybe tomorrow there will be some sort of miracle.

Maybe tomorrow I’ll open the door and they will be well and walking and playing like normal kittens.  Or maybe tomorrow someone will step forward and be open to special needs animals that will just require a little extra patience and a huge heart.

Or maybe tomorrow will be just like today and I’ll still be facing a difficult decision to end the lives of these babies way too soon.