Elvis has left the building

Never has the phrase “Elvis has left the building” meant more then it does today.   Not because I wasn’t an Elvis Presley fan.  I was!  But because in all other previous uses, that phrase meant the end of something.  Today it means the beginning of something.  A new life for a dog named Elvis.

Elvis has been in our shelter for 14 months.  Truthfully I don’t even remember how he got there.  Whether he was surrendered by his owner or found as a stray.  Doesn’t matter now…for that matter, I suppose it never did as whatever his previous owner might have told us about him wouldn’t make a dent in what we know about him now.  Not to say that we would discredit his history entirely, it’s just that what we’ve learned about him over his stay with us, so far surpasses anything in his past that I’m afraid it would be irrelevant. 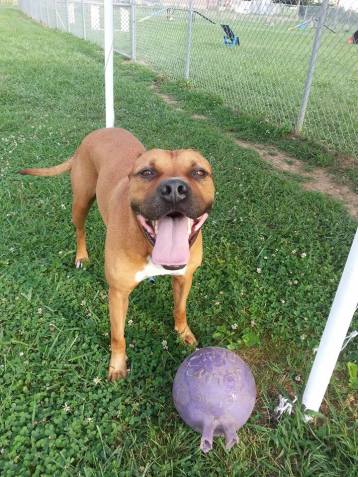 Elvis has been in our shelter for 14 months not because we’re a no-kill shelter and that’s the norm.  We are NOT a no-kill shelter and 14 months is the longest stay I’ve ever known for a dog in our shelter in my 14 years of involvement.  Elizabeth who was with us a year was the previous record holder.  Not a record we really want to brag about.  On one hand it’s sad to think any animal would remained in a caged environment for that long awaiting an adopter.  It’s sad that it would take so long for someone to give him a chance.  On the other hand, it’s amazing that he lasted that long especially since we are an open-admission shelter which in short means we do not turn animals away when we are full.  And we get full often.

I won’t go into the details about how animals are chosen when space constraints or the incoming volume requires decisions to be made, but certainly one of the first questions that our staff has to ask is “who is not doing well in the shelter environment?”  While euthanasia is a horrible thing to have to do simply because we have no more room, animals that are not dealing well with the confinement and stress of the shelter world are often chosen first because of the humane aspects of this decision.

But such was NEVER the case with Elvis.   If he was stressed by his shelter life it was never obvious.  All signs pointed to the contrary.  He ate heartily, he was energetic (overly) and bright eyed each day.  And although he would get excited dogs would pass by his kennel – some more than others – he generally was well mannered and friendly to everyone.   He never displayed any kennel stress, put on weight, learned the schedule and rarely had an accident in his kennel, and was not destructive.  Well wasn’t destructive as long as you put water in his pool.  He didn’t take well to an empty pool on a hot day.

Other than being excited to get outside for his walks and romps in the play yards (the first play yard on the left I suppose will always be known as “Elvis’ yard”) and his known obsession with the cats in the lobby (he was known to grab the cage itself and attempt to take it with him to his yard) he truly had no real vices that should have made it so difficult to find him a home.  Eric, our volunteer who adored Elvis and would from time to time take him home for an overnight break from the shelter would tell you what a mellow guy he was in his home.  Well behaved and docile.  Everyone that knew him will surely miss him…I’ll miss him mostly lounging in the play yard until I would go to get him and then he’d jump up, grab the nearest rope pull or big rubber ball and go dashing about evading capture until he would tucker out (or as much as he had the capacity to tucker out) and then trod back to his kennel.  You never led Elvis anyway, let alone back to his kennel.  He took you there!

So why it took so long for Elvis to find his home I suspect we’ll never know but as with so many things in the animal world, it is no accident I’m sure.  While Elvis didn’t seem to mind the wait, we couldn’t help be anxious for him.  Even though I was certain that for as long as he continued to thrive and be happy in the shelter world, he would remain with us. For however long it took.

Elvis has been a lesson in faith.  In believing that we can make their lives happy even in the caged world of our shelter.  That we can offer the mental and physical stimulation to some to allow them the time necessary to find that home.  While we don’t win every time and sadly Elvis is probably more the exception than the rule, it is possible.  Some animals can truly thrive in the shelter environment!

It’s funny to think he won’t be there tomorrow.  He was normally the first dog out for a walk or to his yard…the unspoken habit among staff and volunteers alike, that he was deserving of more time out than any other because he’d spent more time in than any other.  It was not uncommon that even after a lengthy time out in the yard, that one of our volunteers would take him for another walk before we’d shut down our evening walks.  Everyone worked to keep Elvis happy!

By now someone has written on the volunteer board a big “ADOPTED” next to his name.  As if Elvis might be able to read the words or understand what all the hubbub is about that is swirling about him, today is as special for all of us as it is for Elvis.  Actually today is about our celebration and tonight as Elvis arrives in his new home, that’s when his party really begins.  And as we watch Elvis go bounding down the sidewalk, away from us, and guiltlessly without the slightest look back, just ignore our silly tears.  Despite how it may appear, they are happy ones.  We’re funny that way.  Sad and happy all at the same time.  It’s just how we roll.

And for a while his name will remain on the Board and the happy proclamation of his adoption next to it as a testament to him!   But tomorrow or the next day someone else will need his spot and we’ll be so happy we have room but happier still because of why.  Casey or Chris will erase his name from the board and replace it with another.  Again in joy and with a little twinge of sadness I suppose.  It will take months before we’ll stop referring to Elvis’ kennel as Elvis’ kennel…as much out of habit as it is a tribute to a dog that touched so many.  Friends and strangers that all hoped for this very day and this happy ending.  Rather, this happy beginning.

We’ll love you forever and hope you never forget

The friends you made and the people you met.

But if in your home there’s not room for it all.

Take a little of us with your favorite red ball.

As you go with love from hearts that may burst,

From your shelter family, who loved you first.

“Elvis has left the building” you’ll hear us say.

We longed for this home.  We dreamed of this day.

Have a great life buddy!