Having struggled to find my voice lately or at least a voice that was positive in nature, I sort of quit writing for a bit.  Well that’s not actually true.  I was writing.  I just quit sharing my writing.  Most had been too dark or too negative to warrant public consumption so I used them simply as my own outlet for frustration.  Spewing nastiness about cruelty and abuse was not what I wanted to be sharing on my blog.

But this story has been stored away in my head til the day I found my heart happy to write again and it seems that day has come.  Gathering some of the details talking to Cindy Buckingham, who is as much a central character as anyone, also helped to bring the story to life again and remind me how  worthy a story it is to share!  So here is it and Cindy, this one’s for you!

This story began months ago with a post from a Facebook friend, Rosanne, mentioning that her dear friend had lost their beloved Yorkie and knew replacing the dog they had lost after 14 years was impossible, but also knew they could not be complete without a dog in their lives.  They wanted to find an adult female Yorkie to help fill the void.

Although we didn’t have any Yorkies at that time in the shelter, I knew we would at some point so I tried to file it away in the bucket that is my brain and hoped if we got one, I could dig it out again.

Two days later I wouldn’t have to dig very deep.

Stopping at the shelter after work I met a mommy dog and puppies that had just been brought in by our Officers.  Our staff was in the midst of bathing the flea infested family and Mommy was in the arms of our vet, Dr. Shanna, who already was singing the praises of this drenched little dog.

Within hours I would impulsively start the discussion with Rosanne.

Me:  “Does your friend have her heart set on a Yorkie?”

I was not deterred.

Me:  “Okay, will keep my eyes peeled for the next Yorkie we get but have a wonderful Shih Tzu and puppies that made me think of her.”

Bingo!  But it also made me a little nervous as I’ve not mentioned yet how bad she looks.  Truly, most would not have given her a second look as she was almost bald on the butt, skinny as a rail and fleas were still tap dancing around her body even after a Capstar and a bath. 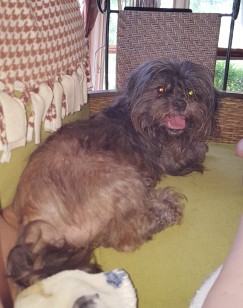 Me, in need of a disclaimer:  “Momma is super sweet but in very rough shape.  Missing hair and really skinny.”  “She’s covered in fleas.”  “Did I mention she has the nicest attitude and is just a love?”

Ah ha, I’m starting to love this lady already as she’s not been scared off by the truth.

Thinking it might serve this dog’s case well to delay a meeting until I could get some weight on her and hopefully some hair on her butt I suggested we wait a few weeks to introduce them to her.  But trying to keep their attention I sent a picture of one of her puppies.  They in no way resembled their mother but they were the cutest puppies in the world. 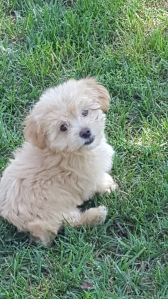 She:  “They will submit their adoption application today.”

I’m impressed.  These people not only are NOT wanting a puppy but an adult BUT are willing to complete an application sight unseen for a dog that I’ve advertised as pitiful but very sweet.  And they are patient…willing to wait a few weeks to meet her.

A plan that only lasts 24 hours.

My impatience, not theirs, drives me to contact Rosanne the next day and offer them a chance to meet Mommy that day.  I still don’t know why but for some reason I wanted them to meet her right then!  Maybe I felt these people would see what we all had seen and fall in love with her personality.  And if not, maybe they weren’t good enough for her.  I guess I wanted to know that right away.  Who knows but I follow my instincts when it comes to things like this.

So I arranged for them to meet me at the Clinic that afternoon and they were there promptly waiting for me when I walked into the lobby.  And somehow overnight Sandy Matheny had already opened her heart wide open to this little dog as she was near tears when I placed the dog into her arms.  I was in tears as I watched her lovingly cuddle her into her chest, kissing her and beaming all the while.

The Matheny’s were a gift to this little dog that I could not have dreamed of.

Sandy and her husband, Rick and I would talk for a long time about their lives, how they traveled in their motor home with their dog everywhere, wintered in Florida and volunteered in shelters wherever they went.   I LOVED THESE PEOPLE!!!  And while certainly devoted to their Yorkie, they have become such fans of shelter dogs and rescues that they knew their next dog would be a rescue.

And so it would be that they would choose this girl to be their next and would patiently wait a few weeks for her to wean her puppies, regain her health and be spayed.  But her name would NOT be Lucy after all.  For whatever reason, she was NOT a “Lucy.” She as a “Molly”.

I would foster Molly for another week while she weaned her puppies and then she would move to Cindy and Lee Buckingham’s, as she deserved a break from her triplets of rowdy boys. She was just such a dear at my house and with the exception of the proper hairdo that Lee would give her within hours of my leaving her at their house, I knew she would do well with Lee and Cindy.  While the puppies, who would stay with me for a few weeks, were the cutest puppies in the world, I assure you that the Cindy and Lee got the best end of that deal.   I love puppies but I don’t adopt puppies because they are….puppies!!!

Cindy could not wait to share this picture to tease me hours after I left her there.  And yes, I admitted sheepishly that she looked so damn cute with her hair like that.  What has become of me???? But I digress.  Molly continued to prove herself the perfect little dog at Lee and Cindy’s.

While waiting for Molly to be fit enough to go home with the Matheny’s, Cindy would be called upon to foster another.  If I’m the “pregnant and about to deliver puppies” foster, Cindy is the “little dogs with bad skin” foster extraordinaire.   And while normally there might NOT have been room at the Buckingham Palace with two fosters already,  they were not going to say no to this dog in need.  If it was a dog.  Her name would be Nora and she made Molly look like a beauty queen.

But just like Molly, her heart and nature would not bear the scars of whatever neglect she had suffered in the past.  She was a doll and a sweetheart too!  And she and Molly were becoming fast friends as well.

Would it be fate that not long after that the Matheny’s would pay a visit to the shelter?  I think so!  Rick had mentioned that they might consider another little dog and apparently just stopped in to browse when Michelle Earl found them in the shelter.  Initially not recognizing them as Molly’s adopters, she spoke to them about a little dog she was fostering BUT then realized they were Molly’s future family and remembered Nora!  Mentioning her to them and that she was also being fostered by Molly’s fosters, before too long a meeting was arranged.  Cindy brought Nora and Molly so they could not only meet Nora but see how great she and Molly got along.  Cindy is crafty that way!

To some it may seem a bit sad or not the fairy tale ending that when they met Molly they didn’t see the Lucy they were looking for.  But sometimes the endings are not as we imagine or as we hope.  Sometimes they are even better!

They found Molly and in doing so, she led them to their Lucy at last.  I’ll let Sandy have the final word on the matter.

She (Sandy, this time):  “They are beautiful and we love them already.  Both are gaining weight.  Molly went to the groomer and they loved her.  Now she runs around wagging her tail and smiling.  Lucy is the silly one who gets in the trash and love to lay on the table.  They both are bed hogs and love to travel. We love our girls and can’t imagine being without them.  The best thing we could have done.”